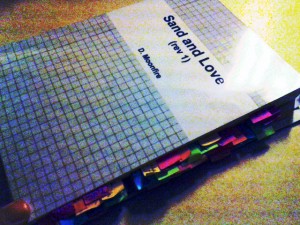 One of the things I like to do for my local beta readers is get a copy of the book printed up as if I was publishing it. That includes typesetting it and sending it to Lulu. I usually don't have a cover, but I just throw a random one on there and print it off.

Yesterday, the first (and only) person to read Sand and Love returned their copy along with a "few" notes and I had to take a picture. That and I had to resist squealing with happiness when she handed the book over to me. 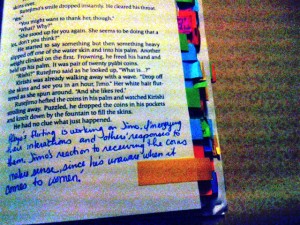 There is something wonderful about seeing all those post-it notes. Most of them are little comments throughout the story about character and plot development, what she was thinking when she got to that point. But, it was also someone willing to spend weeks of their lunch breaks reading through the story, getting involved with the characters, and really helping me.

It was also very encouraging, given everything else that has happened this week. This is a difficult story to write, mainly because I don't want the protagonist to be a classic fantasy hero. He's a pacifist, for starters, but his opponent is himself as much as everyone else. And, writing a pacifist in a fantasy world is really hard. More so when he's also clueless about the girl who has a crush on him and and is willing to defy her entire clan to remain with him. 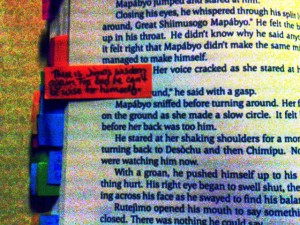 I'll fully admit, I don't always write easy stories. What I like in a novel isn't always what I find in the shelves, but I like this type of story. I'm sure pacing could be tweaked and the little things, but it is also a story I'm enjoying telling.

All of this assumes I get the previous book out. But, I think this is going to be a great sequel to Sand and Blood.