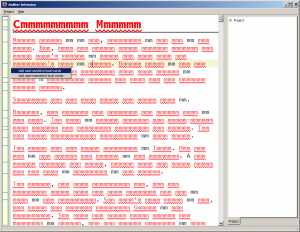 It's now time for the fourth release of Author Intrusion. This is my attempt to have a monthly release of the text editor and, as the previous release, it isn't exactly stable enough to write without a lot of patience.

It is fairly capable though, but mostly as a pure text editor with spell-checking. I've written a novella and seven short stories since I started developing the project. For a sake of curiosity, I used the associated Linux tools to convert my weekly serial (624k words) into the program and navigate around. It's slow to start, but once loaded, it ran rather zippy and I could write almost at my full typing speed in the middle.

The bulk of the changes are related to technical debt, cleaning up code to make it easier to develop in the long run. Mostly, these changes were to fix things like "select all", or selecting text and then typing.

As you can tell from the screenshot, I shifted a few things around. These are completely arbitrary changes until I can figure out docking panes. The project pane on the right is not functional at this point, but I needed it on screen to verify that I had a bug; this will also lead into the changes I'm planning on for October.