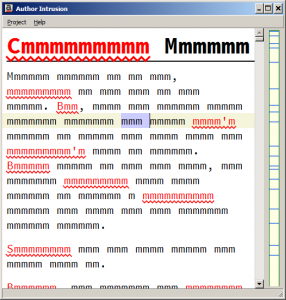 This was a very productive month, but sadly it didn't change the appearance of the editor. Mostly, I was working on the interactiveness of the application to allow editing to be done with a reasonable speed and get rid of a lot of slowness while opening a large document (my 47k novella). Start up speed went from just 800 s to 1.4 s and paging through the document no longer has a 4 s slowdown when the margins went from double-digits to triple and then quadrupedal (mainly by getting rid of the line numbers and rewriting the cache).

(Minor note, the reason I have "mmm" in the image is because I was getting hung up on the words of the novella and not the length and usage. So, I used Perl to convert all lowercase letters to "m" to focus.)

As you can tell from the change log below, I made a bunch of other changes to general usability.

I am sad to say that I did write a number of utilities to let me round-trip between Author Intrusion and my old Creole-based system. The biggest reason was editing. I don't have the ability to isolate a chapter while editing at the moment and it simply became "too big" to edit properly. I always intended to allow for focusing on parts of the project, but I need to spend a month working on the command system before I can really get into that.

Which means, this coming month will be working on pluggable commands. In specific, the "Control-Q" stuff of Visual Studio and providing more than a few hard-coded keyboard commands.

It still isn't really usable for most people, though.