It's been a month since I decided to explore a new avenue for Author Intrusion. I haven't quite caught up to the functionality of the previous version (0.4.0), but I reached a stopping point and figured it was time to show a screenshot or three.

This version is written in TypeScript (basically JavaScript) using Chrome as a rendering engine. It is a much different beast than writing C# and using Gtk#, but I haven't quite decided if one is better than the other. Before the 5th of this month, I didn't know TypeScript, barely knew JavaScript, and had done very little modern web programming. And, since I was using Emacs to write, I didn't have Intellisense to give me hints or Internet access to look it up for half of my development time (my laptop refuses to connect to the company guest network for my lunch breaks).

Now, almost a month later, I'm getting pretty good at TypeScript and have something that looks almost capable. There is still a lot of things that don't work the way I want, but I think another month or two will get me there. When you consider the fact I have working on the previous version of Author Intrusion (or its core libraries) for almost three years, a month isn't that bad (as I try to justify my lack of awesomeness). 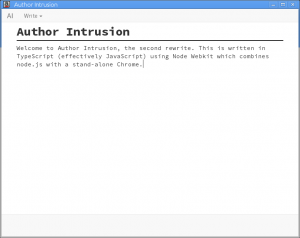 I almost didn't want to consider this a "release," but I decided to cut it off. This is the basic point where the application works. It's no better than Notepad, except that you can't create a new document, but it has the look and feel I'm going for, the internal plumbing for what I'm aiming for, and the core is pretty much filled out.

This was effectively a month-long sprint instead of my usual sprint. I have a number of other things going on and Author Intrusion is actually a lower priority on a number of them. This meant I couldn't work on it as much as I wanted. 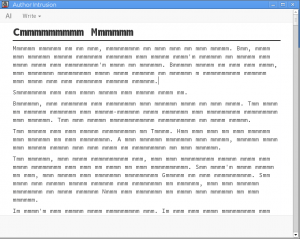 There are a few things that I want to get done before the next version.