While I thought I was done with making a calendar, someone asked if they could see a visual form of the calendar. I thought this would be a fairly simple thing... but, it wasn't exactly. Took me most of the night to actually come up with something I'm fairly happy with.

In context, here are the posts related to this one.

And, the first draft of the calendar:

I decided to use the square boxes for the calendar (much like our own) instead of something fancy like a big circle. This is a lot more readable and shows some of the elements of the calendar.

Like our own, there is the name of each "month" with the Miwāfu glyphs on the left and English on the right. The line of text below it is the name of the weeks. In the boxes, I have simply numbered the days of the month from 1 to 47.

I've been working on Miwāfu for a while, but I apparently completely forgot to actually do the numbers. This is actually what took most of the time, but I think I have a fairly good set of numbers that look pretty decent when put together.

The fun part is trying to figure out little things like decimal points and how a fantasy language would group numbers. Since the number eight pops up fairly often, I decided to keep the desert folk mostly centered around powers of two and went with groups of four but using spaces for grouping since they have the "number bar" that goes over the entire number. The decimal is the vowel placeholder under the number, but with spaces on both side. Since it never made sense to me, I went with using grouping even after the decimal so a large number would be "1234 5678 . 8765 4321". 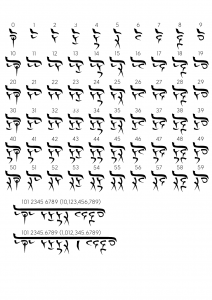 Nothing is set in stone with this, but I feel pretty good about what I've gotten done. I'm not planning on focusing on the lunar calendar for a little while longer, mainly because I have other things to do, but it will eventually show up.