Over at Merry Fates, they had this little writing prompt based on this picture: 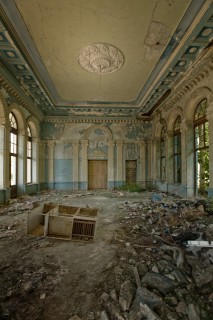 I decided it looked like fun, so I wrote a little flash fiction. Inspired by that picture.

Mason's boots crunched through the crumbling plaster before stopping next to a pile of rubble shoved into one corner. The smells of mold and destruction filled the air and he waved the dust from his face as he peered around the room.

His rumbling voice echoed mutely off the sagging walls. On the far side of the room, a chunk of plaster suddenly swung down and crashed into the floor, casting plumes of dust and grime into the air. Mason jumped back, his hand dropping to an ornate single-shot pistol jammed in his belt, then relaxed when nothing attacked. Shaking his head, he repeated himself.

Fingers slid off the ornate mother-of-pearl handle and briefly caressed the gilding along the barrel. Unconsciously, he hesitated before releasing the gun. The metal of the weapon shimmered from an unseen light and a faint teal glow faded from the barrel with his withdrawing fingers. Picking his way across the rubble, he stopped at a table in the center of the room. Reaching down, he twisted his Timex watch on his wrist to protect it and grabbed the table. Splintered wood dug into his palms but he ignored the discomfort and set the table on its legs. It shook for just a second, then collapsed into a pile of splinters and wood. Even the nails crumbled into rust before his eyes.

He shook his head sadly. Twisting his watch back into place, he wiped his hands and the face of the time piece on his jeans. Hooking one thumb on the worn leather belt, he looked around the pale blue and cream room.

From one of the doors in the room, a soft voice spoke up.

The speaker entered the room and Mason lost his train of thought as he looked at the pale green skin hiding under a cowboy hat three sizes too big for the frail-looking goblin. Slender and delicate, the goblin wasn't pretty or handsome, but every time Mason saw him, he felt his heart skipping for just a second. The overly large clear eyes glanced at the room, then focused on Mason. The larger man saw his own reflection in the yellow eyes. The hat balanced on sculpted ears sank down, obscuring the eyes and Mason found his wits again. Gesturing to the room, he sighed.

â€œLook at this, Niff. Look at all this destruction.â€

Niff pushed the hat up and peered around again.

â€œWhat did you expect from a revolt? Everything gets destroyed.â€

â€œI loved this roomâ€”it had the nicest piano in it and I remember dancing in here.â€

Niff chuckled, â€œYou mean tromping around and insulting all the elves, right?â€

The goblin glided over to the crumbled table in the center. Kneeling down, he whispered encouragingly to the splinters. Dragging his fingers up, he gracefully gestured and the remains of the table rose into the air, reassembling as the slender man guided it with delicate fingers and whispers of love. Mason watched with a smile, a curious smile as he caressed his gun. When Niff stood up, the table hopped around for a moment, then settled into place.

Niff pushed his hat back up and looked back at Mason wit his yellow eyes.

â€œI know, Tar, but humans can't learn how to sing like this. You have to use tools.â€

The goblin gestured to the gun and Mason yanked his hand away from the handle. Sullenly, he responded grumpily.

Niff made a face, â€œThat isn't singing, that is a weapon of mass destruction.â€

â€œExcept for the elf baron who declared war on you. And all of humanity.â€

Mason chuckled and caressed his gun.

â€œIt worked. Besides, I'm a better dancer than singer.â€

The larger man opened his mouth, then closed it quickly. Niff grinned and stood up, patting the table. It shook like a puppy and walked into the corner, the animated table using its legs to paw through the rubble. Mason shook his head in amusement, looked up into the room.

â€œNot in this room, not anymore. A damn shame what happened. I wish people would respect beauty more.â€

Niff raised one eyebrow and reached down to pick up a hunk of carved wood. Water dripped from the delicate etchings and he shook it try.

â€œWell,â€ he pointed at a gaping hole in the wall where the plaster melted from a lathe of gold and silver, â€œThat would be the result of your gun, wouldn't it?â€

Mason nodded and kicked the dust from his boot.

â€œYou did all this destruction.â€

Niff smirked, â€œSo, why are you complaining about the damage you did?â€

The goblin padded over to Mason and touched the back of his hand. Mason went to hold the goblin's hand, but the goblin slipped away uncomfortably.

â€œI'm glad you did,â€ came the simple reply. Mason watched in a moment of sadness, still trying to understand the differences of man and goblin. The slender creature circled the room and the table followed him like a puppy. Mason shook his head and walked over to the other door. Opening it up, he looked at the ornate hall with dozens of massive holes in the walls, all caused by blasts of water from his enchanted gun. He felt sadness welling in his heart as he gestured at it.